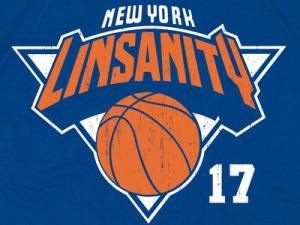 One of the many Jeremy Lin "LINSANITY" merchandise items that came about through his emergence as a star.

Jeremy Lin’s season is over and so is Linsanity! The season where he captivated America and the sports world has come to an abrupt end.  Lin will be undergoing surgery next week for a chronic meniscus tear.  The surgery will put him out for 6 weeks.

Jeremy Lin caught the attention of the world in February when he stepped in for an injured Carmello Anthony. He came in and turned the game against the Nets around immediately, leading the Knicks to victory. He went from being virtually unknown to becoming a superstar overnight. He conquered Kobe Bryant and the L.A. Lakers, beat the Raptors with a heroic final second three point shot and helped the Knicks beat the defending champions Dallas Mavericks. Lin’s face was splattered all over newspapers, magazines and television as he rose to stardom. The NBA must have loved having this new marketable player come out of the blue like he did. He was a big hit in China, due to his heritage and an even bigger star in New York. The Knicks needed a player to save the team from a losing season and to garner the attention a team needs in a city that never sleeps.
The Knicks played tougher teams going into the All Star break, and started losing. When that happened he faded out of the spot light.  Although he still has been a contributor to the team he is less of a star nationally than he was over a month ago.  Who knows maybe this injury has affected him and he can become an impact player again.
I think that Lin is just a solid player that got a lot of hype for a month and now is going to return to reality.  This injury is the best thing that could have happened to him, he was fading away in popularity.  This at least puts everything on pause and lets some remember that incredible month.  Next season the hype will be non existent and he will just be playing off of the bench again.