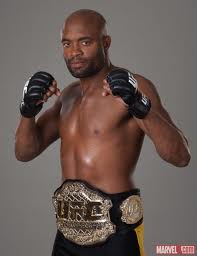 On Saturday night Las Vegas was home to what will probably be the biggest fight of the year for the UFC.  The defending UFC Middleweight Champion Anderson Silva took on his strongest challenger Chael Sonnen in their second fight.  Silva was dominated for the majority of their first fight but pulled out a victory in the final minutes of the fight with a submission victory.  That was 23 months ago, an immediate rematch was demanded by the fans.  Due to several circumstances mostly involving Chael Sonnen that fight was delayed. The MMA World was able to witness one of the most anticipated rematches in the history of the sport on Saturday.

The crowd was really hot before and during the fight.  Sonnen as he said he would refused to shake hands with Silva.  The 1st round was all Sonnen.  He took down Silva in the first minute of the fight and had him on the ground for most of the 1st round.  Sonnen worked well on top delivering ear shots and from time to time was able to raise his body up and bring punches down on Silva’s head.  I scored the 1st round 10-9 Sonnen,  it was as close to a 10-8 round you can get.

The 2nd round started with the crowd chanting USA.  Sonnen tried to take Silva down early but was unsuccessful.  Sonnen went for a judo take down and lost his balance.  Silva took advantage of the misstep and pounded Sonnen while he was up against the cage.  Sonnen was rocked and could not defend himself anymore and the fight was called at almost 2 minutes into the 2nd round.

After the fight Silva said the the emotions were running high prior to the fight but its MMA and he respects Sonnen.  Sonnen had no choice but to accept the show of respect and shake hands with Silva.  Sonnen later said that he had his opportunity and that was all he could ask for, he also said that Silva was a deserving Champion.

Despite the loss this fight was beneficial for Sonnen.  He was exposed to a greater audience with all of the hype surrounding the fight.  He displayed his excellent promo skills and showed he is a really good fighter to many who may have never seen him before.  He could be a big draw for the UFC in the future.

Silva will be a UFC Champion for 6 years in October.  He has showed himself to be a true champion.  Silva will undoubtedly go down in the history of MMA as one of the best champions not only in his weight division but pound for pound.

It is unknown what will be next for Silva however.  He will probably not fight again until the end of the year or early next year.  It has been rumored that he was considering retirement last year.  While he is approaching the age and career length where fighters usually fall back I don’t see him retiring as champion.  I believe Silva will continue to fight until he loses the belt.  Silva cemented his legacy as a great champion even further on Saturday night and the MMA World will wait to see how long he can continue on as champion.