The UFC Light Heavyweight Champion Jon Jones helped make history this past week.  It was not good history by any means.  The UFC was forced to cancel their September 1st show in Las Vegas.  Jones is completely responsible for this cancellation.  When his challenger went down due to injury on Thursday a wild ride began that did not slow down until Friday afternoon. 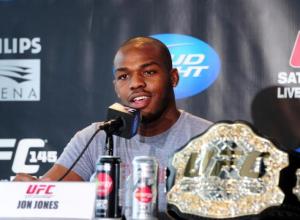 UFC President Dana White was able to get a replacement in Chael Sonnen.  Jones would not face Sonnen with only 8 days before the fight.  Jones’ Coach Greg Jackson tried to take the blame for not letting his fighter take the fight.  With that situation Dana White was forced to cancel the show and blamed Jackson for being a “sport killer”.

The next option for the fight was Lyoto Machida.  Machida was due a title shot but not this soon.  It was announced that Machida would take the place of Henderson and the fight would be moved to the UFC 152 show on September 22nd in Toronto.  Machida later declined and the UFC went after another former champion to fill the spot.  That former champion was Shogun Rua, he too declined the fight.

With no other options for a main event fighter for Jones, Dana White chose UFC veteran Vitor Belfort.  Belfort accepted and the fight will take place on the UFC 152 show.   Belfort has great hands but does not have the genetic gifts that Jones possesses.  Belfort is much like a Dan Henderson type fighter in the sense that he is a dangerous veteran that could win but will likely lose.  This 24 hour period of insanity is a true low point for the UFC.

Traditionally when a fighter goes down due to injury the replacement is usually accepted by the remaining fighter.  Jones did not want to follow suit.  Because of this he will drive his appeal down with a fan base that does not really see him as a star yet.  Jones is a fan favorite for the hardcore MMA fans but not casual fans who are the ones that really make or break a star and a champion at the ticket window.  Jones has gone Heel (a pro wrestling term for bad guy) but he is doing it the wrong way.

MMA has had its share of heels through its history.   The most recent being Brock Lesnar and Chael Sonnen.  Both of those fighters know what they are doing with their characters and play the role well.  They make calculated moves that make themselves the bad guys but still marketable and appealing.  Jones does not have the personality or the where with all to be a true heel.

Marketing was stated as a possible reason Jones did not take the fight.  Jones was worried that he may not keep his hot streak alive and possibly lose and hurt his selling potential.  If that was his concern he would have taken the fight with Sonnen.  Even if he lost and came back to another title shot he would be in a better light and position than he is by not taking this fight.  Sonnen was the perfect opponent, he had not been training and would be moving up a weight class.  Jones on the other hand would be peaking for the fight still and would have had 3 months of training under his belt.  Now Jones will be know as the man responsible for destroying UFC 151.

There are many victims from Jones’ decision.  The Cable companies who promoted the fight and where counting on their percentage of the PPV numbers.  The UFC has also spent a lot of money promoting the fight, they even had a huge billboard at Times Square in New York City.  The fighters who will have to wait on a pay day because their fight has to be moved to October or even November.  The most hurt will be the fans who have spent their money to fly into Las Vegas, stay in a hotel  and wait to have their tickets refunded by the UFC.

Jon Jones will likely become a villain from this situation, which for most fighters could be a positive thing.  Not for Jones who needs to be liked.  He recently signed a deal with Nike and when it come to merchandise if you are not liked people will not buy you things.  Jones has a long road ahead of him, can he shake this situation?  Maybe, he could come out on UFC 152 and knock out Belfort and everyone will forget about this like it never happened.  It could be something that sticks with him his entire career and effects his earning and drawing potential.