“Ready For Glory” The Cowboys Defeat The Giants

The 2012 NFL Season kicked off on Wednesday Night in New York City. The Dallas Cowboys came into town to face their rivals the New York Giants. The Giants are going into the season as the defending champions. The Cowboys are beginning this season like they have so many others, just wanting to not choke under pressure. The Cowboys made a statement last night, they may be ready for success. 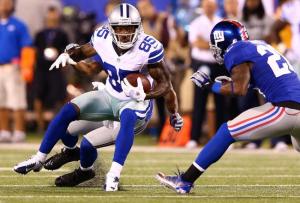 Breakout Star Kevin Ogletree on his way to a touchdown.
(Getty Images)

The Cowboys won the game 24-17, in a game that many thought would end in disappointment for “Americas Team”. The Cowboys dominated the Giants more than the score will show. The Cowboys QB Tony Romo played with poise and threw for 3 touchdowns and had 307 yards passing. Romo made a statement in this game to all of his detractors that he is a big time QB and can lead his team to wins. Kevin Ogletree had an incredible game, going into the season as the third wide receiver for the Cowboys. Ogletree was given a chance to shine when Jason Witten was limited due to injury. Ogletree took full advantage of his opportunity with 114 yards receiving and had 2 touchdowns.

The Giants did not look like the defending Super Bowl Champions in this game. QB Eli Manning Had just over 200 yards passing and only 1 TD. The Defense of the Giants was just not enough to contain the Cowboys. Point proven when Ogletree scored a 40 yard TD when he was able to break the tackles attempted by the Giants Defense.

The Cowboys began with a bang but can they keep it up? They have a history of tanking in the late part of the season and in the playoffs when they make it. This could be a sign that everything has finally fallen into place for the Cowboys who have struggled for most of the 2000’s. Tony Romo has spent many years trying to be the QB to take the Cowboys back to the Super Bowl. He has come up short many times, will this year be the same? We will have to watch how the Cowboys play the rest of the season to truly know but I have a feeling this Cowboys team is special.

2 responses to ““Ready For Glory” The Cowboys Defeat The Giants”