Top 3 Stories From Week 2 Of The NFL

The incredible action of week 1 carried into week 2 on Sunday.  Week 2 brought many great match ups and answers to questions unanswered in week 1.  2centsworthofsports.com brings you the top 3 stories from the second week of the NFL.

Eli Manning Rallies His Giants Past The Buccs, Has A Career Game 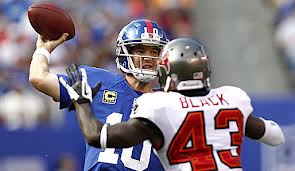 Eli Manning and the defending Super Bowl Champion New York Giants suffered a disappointing loss in week 1 to the Cowboys.  Anxious to prove they could repeat as Champions, the Giants played the Buccs in week 2 in what turned out to be a crazy game.  The Buccs came out strong in the 1st half leading the Giants 24-13 going into half time.  The Giants came out of half time only scoring 3 points in the 3rd quarter.  The 4th quarter is when the Giants picked it up a notch by scoring 25 points.  The Giants defeated the Buccs 41-34.  The game was one of the wildest of the first 2 weeks.  Eli Manning faltered early with 3 interceptions but made up for it with 510 yards passing and throwing for 3 touchdowns.  The 510 passing yards were a career record for Manning in one game.  The Buccs looked really strong in this game but lost due to Eli and his comeback heroics.  Eli and the Giants showed in week 2 that they are ready to attempt a repeat at the Championship this year.

The number 1 overall pick in April’s Draft Andrew Luck came in with high expectations.  In week 1 he did not meet them, week 2 was another story.  Luck helped his Indianapolis Colts win their 1st game of the season on Sunday against then Minnesota Vikings, winning by a score of 23-20.  Luck was 20-31 passing with 224 yards in the air and rushed for 21 yards.  Luck scored his first 2 touchdown passes of his career in this game, his first was to Dwayne Allen and his second to Reggie Wayne.  More importantly Luck threw no interceptions which was a huge improvement from week 1 where he threw 3.  Luck has definitely improved from week 1 and should develop into a really good NFL QB over the course of the season. 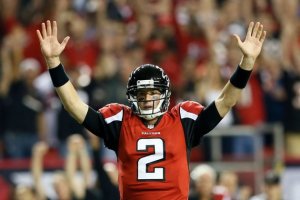 On Monday Night the Broncos came into Atlanta to face the Falcons in Prime Time.  Matt Ryan and the Falcons were victorious and made a statement.  The Falcons are likely back to the form they were in a couple of years ago.  Matt Ryan led his team to the win with excellent passing.  Ryan had 219 yards passing and had 2 touchdowns.  Manning on the other hand had a rough night,  throwing only 1 TD pass and throwing for 3 interceptions.  The Falcons scored quickly and went into halftime with a 20-7 lead.  In the 3rd quarter the Falcons scored 7 points while the Broncos had 0.  In the 4th quarter Manning tried to lead his team to the comeback victory as his brother Eli did on Sunday but could not pull it off.  The Broncos were able to score only 14 points in the final quarter.  The final score was 27-21 in favor of the Falcons.  It was an interesting match up with and even more interesting outcome.  The Falcons are going to be a strong team for their NFC foes to compete with this season.