Defending 135lb womens champion Ronda Rousey beat Liz Carmouche in the first ever womens bout in the UFC. The victory came in the first round via armbar submission. Which is no surprise because her previous 8 victories were all delivered in the same fashion. There was however a point in the fight that Rousey looked to be in trouble. It came in the first minute of the fight when Carmouche was on Rousey’s back. Carmouche attempted to go for a choke and at one point had Rousey in a neck crank. Rousey stayed patient and was able to get Carmouche off of her and within a matter on minutes had her in an armbar. Carmouche quickly tapped and the fight was over. 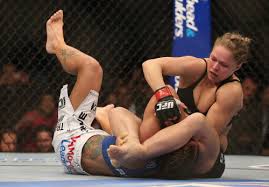 With this fight history was made as it was not only the first womens fight in the UFC’s 20 year history, it was also the main event. Ronda Rousey will now be known as the first ever UFC womens champion. Rousey has definitely set her self up to become a mega star. Within 2 years she has gone from an unknown fighter fighting on low visibility Strickforce on Showtime events to main eventing in the biggest MMA promotion around. This is largely due to the way she has amassed her now 9 victories. All of her victories have come in the first round with an armbar submission, most of which came within under a minute of the fight. She has established the armbar as her finisher much like a pro wrestler has a signature finishing maneuver. This is a gimmick that could take her very far in the sport and also create a legend about her like Mike Tyson had in the 1980’s with his knockout punches.

Ronda Rousey will more than likely fight again by years end. The UFC does not have the other big name womens MMA fighter Chris Cyborg. Cyborg recently signed with Invicta. The UFC does have a fresh crop of talent to build up for her. Its pretty safe to say that her next fight regardless of the opponent will be a big draw. She has developed into a super star the like of which will overshadow the previous Queen of MMA Gina Carrano. It will be exciting to she where this crazy ride Rousey is on will end up.

1992 NBA All Star Game “The Greatest All Star Moment”

The NBA has had an All Star game since 1951.  With the greatest of all time having competed in this contest it is no surprise it has been the place for great moments.  The greatest NBA All Star moment came in the 1992 game.

The game took place in Orlando, Florida and featured a class of superstars the likes of which will never be seen again.  Great players like Michael Jordan, Patrick Ewing, Karl Malone and David Robinson just to name a few.   The roster was so stacked that 11 of the 12 players that would make up the 1992 “Dream Team” were on the floor that day.

The biggest name in the lineup was Magic Johnson.  Magic had retired from the game of basketball in November of 1991.  This came at the same time he made a shocking announcement that he had contracted HIV.  The sports world was devastated by this news.

Magic Johnson had been revered as one of the greatest players of all time.  He transformed the point guard position into what it has become today.  The tragic news also brought the realization that he would never play again. There was however one thing that everyone forgot about, Magic’s determination and drive.

Magic Johnson came back to basketball after 3 months out of the game to a standing ovation.  The stage was set for Magic to steal the show and boy did he.  Magic played 29 minutes and scored a total of 25 points in this game for the ages.  He battled it out with Michael Jordan who was also a mega star at that time.  Magic played with a youthful spirit.  You can watch now in 2013 and still feel the excitement and energy that was alive in the Orlando Arena.

Magic Johnson finished the game by going one on one with both Isaiah Thomas and Michael Jordan.  He sank a 3 pointer with 14 seconds left on the clock to score the final points of the game.  The final 14 seconds were not played.  There was no reason the game was already out of reach for the East who lost by a score of 153-113.  It was an incredible moment and the right way to end the game, with Magic on top.  Magic was awarded the MVP trophy and lauded by all of his peers and the fans in the Arena.

It was to be Magic Johnson’s swan song.  However he would end up on the 1992 Olympics Basketball team.  Even though his career had more moments that followed that All Star game.  His greatest came on that court in Orlando.

The Super Bowl today will be the first to take place since 2centsworthofsports.com’s inception. I can think of no better way to celebrate that fact than to make the 1st ever Super Bowl prediction on the site. So here is who we have.