Many know that Hank Aaron was the first player to tie and break Babe Ruth’s all time home run record.  However most don’t know that the historic tying home run came on Opening Day.  On April 4th, 1974 the Hank Arron and Atlanta Braves played the Reds in Cincinnati, Oh.  It was in that game that Aaron hit his 714th career home run.  The historic home run came in Hank Aaron’s first at bat of the 1974 season.  Jack Billingham was the pitcher that gave up the home run. 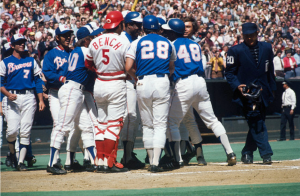 There was no better place for this incredible moment to happen in Cincinnati.  The city is home to the first ever professional baseball team, the Reds.  Everyday until 1990 the Reds had thrown the first pitch in every baseball season.  Opening Day is even an official holiday in the city, complete with a parade.

That great Opening day moment almost never happened.  Prior to the season opener the Braves management was worried that Aaron would not only tie but break the record in Cincinnati.  They were so concerned that he was going to sit out the first series of the season until the team returned to Atlanta.  The Braves were forced to play Aaron in at least two games of the three game series.

Hank Aaron would not hit another home run until April 8th, 1974 in Atlanta.  That home run would be his 715th and broke Ruth’s all time record.  Aaron retired after the 1976 season with the Brewers.  When his career was over Aaron had 755 career home runs.