On This Day In 1993: Nolan Ryan Put Robin Ventura In A Headlock

Nolan Ryan was 46 years of age when the 1993 MLB season began.  He announced that he would retire at the end of the season.  Nolan Ryan had pitched magic through four decades and was ready to call it a career.  The last big moment in his pitching career came not from his pitches but from his fists.

On August 4th, 1993 the visiting Chicago White Sox were in Arlington to take on the Texas Rangers.  Nolan Ryan was on the mound for the Rangers.  After giving up 2-runs to the White Sox in the first inning he was facing young third baseman Robin Ventura.  Ventura had hit for an RBI single off of Ryan in the first inning.  On his first pitch Ryan beaned Ventura in the elbow. 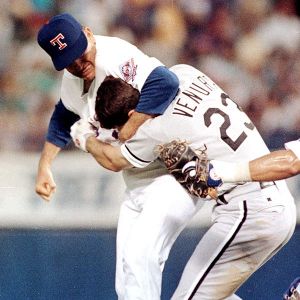 Robin Ventura appeared to be walking to first base when he suddenly threw his helmet down and charged at the mound.  Ryan calmly side stepped Ventura and put him in a headlock with is left arm.  Ryan proceeded to punch the 26 year old Ventura in the face approximately 6 times before his catcher Ivan Rodriguez could pull him away.  The teams quickly cleared the bench and a wild brawl ensued.  When the field was cleared 5 minutes later, Ventura and his manager Gene Lamont were ejected from the game by the Umpire.  Ryan would not be ejected due to the fact he never left the mound until Ventura reached him.

Nolan Ryan would leave the game in the seventh inning with his team leading 5-2.  The score would not change and Ryan received the win.  It was his third win of the season.

Nolan Ryan would only pitch for a few more times before his arm was finally thrown out in late September.  This is not only one of the many memorable Nolan Ryan moments but it was the most memorable baseball fight of the 1990s.  The fight was played numerous times on television newscasts the next day.  Everyone was happy to see a 46 year old Ryan school Robin Ventura who was 20 years his junior.  It showed how tough Ryan really was and baseball fans nation wide loved it.  This was an incredible moment for Ryan to end his final season on.

5 responses to “On This Day In 1993: Nolan Ryan Put Robin Ventura In A Headlock”