The History Of The 1st Overall Pick In The NFL Draft 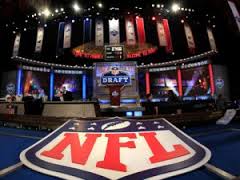 The tradition that is known as the NFL Draft came into existence in 1936.  The first player ever taken in the NFL Draft was Running Back Jay Berwanger.  The Philadelphia Eagles drafted Berwanger, unfortunately he would never play a pro football game due to salary disputes with multiple teams

Since then the NFL Draft has involved thousands of players, many of which have gone on to become all time greats.  Many more however went on to have careers that would earn them the dubious distinction of being called a “Draft Bust”.  The most coveted position for any team is the first overall pick.  The team that holds this position is usually in desperate need of a break out rookie that can turn their franchise around.  There is only one chance for first overall greatness every year.

There have been only 78 men who can call themselves the first overall pick in the NFL draft.  The positions picked the most may not surprise you but the positions that were picked the least  might shock you.

The quarterback position has the title of the most popular first overall pick in draft history.  Twenty seven QBs have been nabbed by teams with the most coveted draft spot.  Ten of those twenty seven became pro bowl players, names like Eli Manning (2004), Peyton Manning (1998), Drew Bledsoe (1993) and Vinny Testaverde (1987) just to name a few.  Only Troy Aikman (1989), John Elway (1983) and Terry Bradshaw (1970) had careers so great they were inducted into the Hall Of Fame.

A few of the players drafted in the last decade will more than likely find a home in the Hall Of Fame.  As of now the first overall pick has only been a future Hall Of Famer twelve of the seventy seven times.  Who knows, we might see the next great NFL player drafted with the first pick tonight in the 2014 NFL Draft.