On November 22,2014 in Norman, OK NCAA history was Made. Oklahoma Sooner running back Samaje Perine set a new NCAA record for rushing yards in a single game with 427-yards. Perine did so in a blowout game where his Sooners defeated Kansas by a score of 44-7. Perine also scored 5 touchdowns during this incredible performance. 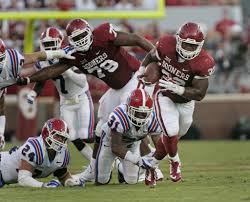 It is pretty amazing that a record that stood for 15 years was broken twice in one week. Samaje Perine set the bar far higher than Melvin Gordon did just one week earlier. This record will be very hard to beat and will not likely be done any time soon.

This entry was posted in NCAA, Sports History and tagged college, did, football, game, held, holds, how long, how many, it, kansas, ladainian tomlinson, melvin gordon, NCAA, November, oklahoma, running back, rushing record, samaje perine, sooners, stand, when where, who, wisconson, years. Bookmark the permalink.