On this day in 1991, Oakland Athletics outfielder Rickey Henderson broke Lou Brock’s career stolen bases record.  This historic event happened in a day game against the St Louis Cardinals in Henderson’s home stadium in Oakland, CA.  Henderson stole his 939th career base breaking Brock’s previous record of 938.  Immediately the game was stopped and a ceremony was performed to commemorate the record breaking moment.  Henderson was given the base he stole just moments before and an address to the fans in attendance were he proclaimed “I am the greatest of all time”. 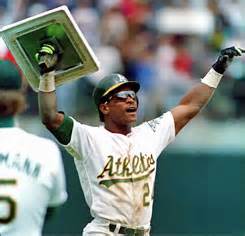 Rickey Henderson was drafted by the A’s in the 4th round of the 1976 MLB Draft.  He would make his Major League debut for the A’s after about 3 years in the Minor Leagues.  During his debut against the Texas Rangers on June 24th 1979 Henderson stole his very first base in the Majors.  It was just a preview of what would become and incredible career.

Rickey Henderson played from 1979-2003.   During his 4th season he stole a record 130 bases, it became the new record for a single season that still stands today.  Henderson stole the most bases in Major League baseball 12 different seasons. He was on two World Series Championship teams the first in 1989 (Oakland A’s) and the second in 1993 (Toronto Blue Jays).  One of his most outstanding achievements other than breaking career stolen bases record would have to be being named the American League MVP in 1990 while playing for the A’s.

Rickey Henderson’s amazing career came to an end on September 19th, 2003.  When he hung up those blazing cleats he had stolen 1,406 bases during his career.  Henderson will go down in history as the most amazing base stealer ever.  His career stolen bases record is one that will be very hard to break.