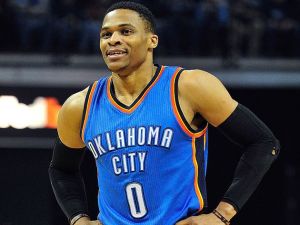 After eight seasons playing alongside NBA All-Star Kevin Durant, Russell Westbrook had the Oklahoma City Thunder all to his own in the 2016-17 NBA Season.  Everyone knew how incredibly athletic and skilled Westbrook was but I don’t know if any body would predict this season he would achieve all he did this season.

The most important stat for Russell Westbrook during the 2016-17 NBA Season are his 42 triple-doubles.  Yeah that’s right, he had a triple-double in more than half of his teams regular season games.  During the course of the season there was much doubt as to whether he could break the record of 41 triple doubles.

As a fan it seemed as almost every night he was ending a game with a triple-double.  This was one of the best regular season performances by any player in NBA history.

Russell Westbrook’s historic achievement was made on April 9, 2017 in Denver Colorado against the Nuggets.  In this game where he had his 42 triple-double of the season he did it in style by scoring 50 points.  He moved ahead of NBA Legend Oscar Robertson that night who held the previous record of 41 triple-doubles in a single season.

He finished the season with an average of 31.6 points, 10.7 rebounds, and 10.4 assists.  It’s insane to thing about the fact he averaged a triple-double per game.  At 28 years old he still has many more great years ahead of him and who know how many other records he will break before his career is over.