It used to be that a new NFL quarterback had time to develop and flourish over multiple season, not anymore.  There are many teams each year that need solutions for their QB position woes.  They want it fast and the best way to go now is with a top ten QB, rather than the veteran back up or fallen starting QB.  It is easier to go with a new QB and take a chance at their future.  The old system of getting a veteran QB is going away because teams just don’t want to be stagnate anymore.  Players like Cam Newton have done great things to changes the way teams look at top pick QB’s.

In April the Washington Redskins went in the direction that most teams are going.  That direction is with a top pick QB to be the future of their franchise.  With the second pick in the first round of the NFL Draft the Redskins selected Robert Griffin III (RG3).  RG3 had an incredible final season at Baylor in 2011 and won the Heisman Trophy.  RG3 has drawn many comparisons to Cam Newton, in terms of both athleticism and potential.

On Sunday RG3 made his highly anticipated regular season debut.  He led his Redskins into New Orleans to face the Saints and one of the best QB’s in the league Drew Brees.  Griffin got off to a great start completing his first 7 passes for 123 yards.  One of those passes was an amazing 88 yard pass to Wide Receiver Pierre Garcon.  Garcon was able to make it into the end zone for Griffin’s 1st NFL touchdown pass, which came in the 1st quarter.  Griffin’s 2nd touchdown pass came in the second quarter, a 5 yard toss to Aldrick Robinson.  Going into half time the Redskins were beating the Saints by a score of 20-14.

In the second half of the game Griffin led the Redskins down the field in position for 3 made field goal attempts.  The Saints tried to comeback in the second half but with a just a field goal, two touchdown passes and a 2 point conversion it was just not enough.  The Redskins won the game by a score of 40-32.

Griffin had an outstanding debut with 320 yards passing, 42 yards rushing, 2 touchdown passes and no interceptions.  The Redskins might just be back in a big way.  Griffin met all the expectations of the Redskin fans and his team, can he keep it up?  That will be the fun thing to watch for this season.

The Pirates have been changing the perception of their team this year.  After years of dwelling in the cellar of the National Leagues Central Division they seem to have turned things around.  The team currently holds a record of 51 wins and 40 loses and are tied for first in the division with the Cincinnati Reds.  Both teams hold a 5 game advantage over the defending World Series Champion St. Louis Cardinals.  Superb pitching has a lot to do with their success but beyond the pitching is the incredible play of Andrew McCutchen. 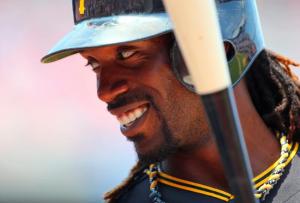 The Pirates Andrew McCutchen is having an MVP caliber season heading into August.
(Getty Images)

McCutchen is having a great year and has shown himself to be the team leader.  He has the best batting average in both leagues batting .369 after 87 games played.  He also has 22 home runs, 65 RBI’s, 65 runs and 14 stolen bases.  Producing many walk off game winners and with the lowly Pirates not looking so low combined with his stats shows that he is in the running and possibly the lead to win the National League MVP trophy this year.

McCutchen was drafted by the Pirate in the 1st round of the 2005 draft with the 11th overall pick.  He is in prime position to turn this franchise around for good and be recognized as one of the best baseball players around.  He has added excitement to a team that had nothing to get excited about since Barry Bonds left after the 1992 season.  He has had a few good seasons already but none as dominant as he has been this season.  The fact that the Pirates are in 1st place in late July is amazing in its own right.  The city of Pittsburgh could be transferred from a football city into to a baseball city in just a matter of a couple more years.

The Pirates have a lot to prove still.  Can they make the playoffs for the first time since the early 90’s?  Can they advance in the playoffs?  Can they continue to be a good team year in and year out?  All of those questions ride on the play of McCutchen.  If McCutchen continues this run he will be the N.L. batting champion and should be the N.L. MVP.  Recognition of that level would be incredible for the Pirates franchise.   So if you have not been following this player or this team its time to open your eyes and believe what you are seeing,  its true the Pirates are for real and they have one of baseballs best rising stars.