It used to be that a new NFL quarterback had time to develop and flourish over multiple season, not anymore.  There are many teams each year that need solutions for their QB position woes.  They want it fast and the best way to go now is with a top ten QB, rather than the veteran back up or fallen starting QB.  It is easier to go with a new QB and take a chance at their future.  The old system of getting a veteran QB is going away because teams just don’t want to be stagnate anymore.  Players like Cam Newton have done great things to changes the way teams look at top pick QB’s. 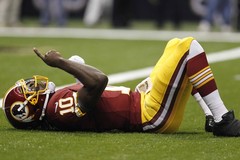 In April the Washington Redskins went in the direction that most teams are going.  That direction is with a top pick QB to be the future of their franchise.  With the second pick in the first round of the NFL Draft the Redskins selected Robert Griffin III (RG3).  RG3 had an incredible final season at Baylor in 2011 and won the Heisman Trophy.  RG3 has drawn many comparisons to Cam Newton, in terms of both athleticism and potential.

On Sunday RG3 made his highly anticipated regular season debut.  He led his Redskins into New Orleans to face the Saints and one of the best QB’s in the league Drew Brees.  Griffin got off to a great start completing his first 7 passes for 123 yards.  One of those passes was an amazing 88 yard pass to Wide Receiver Pierre Garcon.  Garcon was able to make it into the end zone for Griffin’s 1st NFL touchdown pass, which came in the 1st quarter.  Griffin’s 2nd touchdown pass came in the second quarter, a 5 yard toss to Aldrick Robinson.  Going into half time the Redskins were beating the Saints by a score of 20-14.

In the second half of the game Griffin led the Redskins down the field in position for 3 made field goal attempts.  The Saints tried to comeback in the second half but with a just a field goal, two touchdown passes and a 2 point conversion it was just not enough.  The Redskins won the game by a score of 40-32.

Griffin had an outstanding debut with 320 yards passing, 42 yards rushing, 2 touchdown passes and no interceptions.  The Redskins might just be back in a big way.  Griffin met all the expectations of the Redskin fans and his team, can he keep it up?  That will be the fun thing to watch for this season.