In July of 2010 Lebron James was live on ESPN and sports fans all over the world were watching to see where he would go as a free agent. Many consider that moment one of James’ worst since bursting onto the national sports scene in 2002 while he was still in High School. With the words “I have decided to take my talents to South Beach” James ripped the hearts out of the already heart broken Cleveland sports fans bodies. The fans of Cleveland loudly voiced their disapproval and ran to the streets to burn James jerseys and shout their hate for their once beloved star.

Lebron James wearing the jersey we will see him in again when the 2014-15 NBA season begins. (Getty Images)

Fast forward four years to today and a lot has changed for Lebron James. James never won an NBA Title in Cleveland during the seven seasons he played there. However James was in the NBA Finals over the past four seasons and won two titles with the Miami Heat. James had accomplished his dream of winning an NBA Championship and seems to rest easier with his accomplishment than he did as a player still seeking a title four years ago.

There was much speculation as to where Lebron James would go after he declined the final two years of his Miami Heat contract to pursue free agency. He spent the last ten days of his free agency period to make everyone wait and see where he would end up. On July 11th, 2014 around 1pm EST its was announced through a press release from James that he would be returning to back home to Cleveland. The fans of Cleveland have largely forgiven James for what happened that summer in 2010 and just wanted him back. Cleveland got their wish and their Ohio son back today.

While the city of Miami was reaping the benefits of having Lebron James for the past four seasons the Cleveland Cavilers have struggled to say the least. With multiple number one picks in the NBA Draft the team never recovered after James departed but do have the pieces in place for James to excel with. Much talk will swirl over the next four months before the season begins about whether James made the right choice but one thine is certain, Lebron James makes the Cavs an instant contender.

College Football had their fourth week of action on the 22nd of September.  We had an upset of a top 25 team, Heisman level performances and a one of the best games of the season this past Saturday.  So without further a do, 2centsworthofsports.com presents it’s top 3 stories.

The Hurricanes Defeat Georgia Tech In A Wild Game

The University of Miami and GA Tech squared off in an ACC battle on Saturday afternoon.  No one had any idea they were about to have one of the most exciting games of the season thus far.  Miami came out strong racking up a 19-0 lead in the first quarter.  Both touchdown passes of the first quarter came from Miami’s starting QB Stephen Morris.  GA Tech turned the tables in the second quarter scoring 22 unanswered points.  Two of those scores were rushing TD’s from Tech’s running back Tevin Washington, the first was a 2-yard run and the second a 10-yard run.  The score at halftime was 22-19 in favor of GA Tech.  The third quarter brought more success for Tech who had 2 rushing TD’s, from Tony Zenon and Tevin Washington.  Miami had only one field goal during the third quarter.  Tech led 36-22 going into the final quarter.  Miami came back in the fourth quarter with a rushing TD and passing TD to tie the game at 36 all and send the game into overtime.  In overtime running back Mike James rushed for a 25-yard game winning touchdown, the game ended with Miami on top 42-36.  This game was incredible and was a win the Hurricanes needed after starting the season with two disappointing losses.

Kansas State came into Oklahoma on Saturday night with one objective.  The objective was to avenge a heartbreaking loss last season at the hands of the Sooners.  K State took the lead in the second quarter 7-3 with a 2 yard fumble recovered touchdown by Jarell Childs.  K State kept the lead for the most of the game.  The final score was 24-19 for K State.   K State’s QB Collin Klien was the star of the game with 149 yards passing and 79 rushing.  Klien also had a passing TD and scored a rushing TD with a 5-yard run into the end zone in the early part of the fourth quarter.  The Sooners’ QB Landry Jones had a bad game giving up a fumble and throwing for an interception.  The game puts Kansas State’s record at 4-0 and the win should put them in the top ten if not they will be very close.

Florida State defeated Clemson 49-37 on Saturday night.  The win puts the Seminoles at 4-0 for the season and has them charging through the season after the National Championship.  The break out star of the night was FSU’s QB EJ Manuel.  Manuel passed for 380 yards and ran for 102.  He had two passing touchdowns while leading the Seminoles to the victory.  This was a great win for FSU against a top ten opponent at home.  The FSU faithful finally have a team that could capture the National Championship after years of not contending for the crown.  This game also showed that the Seminoles have a possible Heisman candidate in EJ Manuel.

UFC On FOX 4, Machida “Most Impressive”

The UFC returned to Loas Angeles, CA and the Staples Center on Saturday night.  The event was the UFC’s 4th special on the FOX network.  The main show on FOX featured four fights.  Two of the fights featured Light Heavywieghts that would determine who will face the winner of the Jon Jones VS Dan Henderson for the division’s championship.  UFC President stated earlier this week that the fighter who looked “Most Impressive” would get the future Light Heavyweight Title shot.

The show started with a Welterweight fight between Damarques Johnson and the returning Mike Swick.  Johnson dominated the fight on the ground in the 1st round.  When the 2nd round began the fight quickly turned around for Swick who was able to grab Johnson’s leg and take him down.  While Swick was taking Johnson down when he delivered a knockout punch to Johnson and was victorious in his return to fighting after a 2 year absence.

The next fight had Joe Lauzon defeat Jamie Varner in a Lightweight contest via submission in the 3rd round.  This was an incredible back and forth fight that had both men matched up pretty evenly.  Varner seemed to get tired as the fight progressed.  Lauzon took advantage of Varner’s fatigue with a triangle choke in the 3rd round that forced Varner to submit.  Great showing for both fighters but this fight made Lauzon look like a star.

In the 1st of 2 Light Heavyweight bouts, Lyoto Machida defeated Ryan Bader in the 2nd round via knockout.  Both fighters stood up during the 1st round and neither fighter took great risk or damage.  Early in the second round Machida counter punched his way to a victory when Bader took a chance at charging at Machida with strikes.  Machida looked good in this fight and ended it early like he was expected to do.

The Main event and final Light Heavyweight bout took place between Shogun Rua and Brandon Vera.  This fight was won by Rua with a knockout in the 4th round.  This fight was mostly dominated by Rua who had Vera on the ground for a lot of the fight and landed more strikes.  Vera did looked good in the fight with the amount of punishment he was able to take and still push through.  Rua won when he knocked Vera down to the ground with a punch against the cage and was able to finish it by punishing Vera.  Rua admitted he was getting tired towards the 2nd round and it showed. 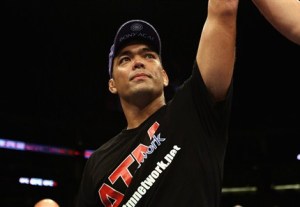 Dana White after the show was over announced that he felt Machida was “most impressive” and would recieve the future title shot.  White’s decision was the obvious and correct one.  Jon Jones is likely to be the Champion who will face Machida later this year or early next year.  Jones does have to fight Dan Henderson who is a legend in the sport but probably will not be able to defeat Jones.  Jones has previously defeated Machida so the fight will be difficult for the UFC to sell.  That is the nature of the beast however and the UFC will just have to find a way to market the fight.

This was a solid show with good fights that did not go to decision.  The UFC needs to continue to put good shows on FOX so that they can attract more casual fans.  It would be to their advantage to put bigger fights on the FOX shows to expand the audience.  The UFC feels their main focus should be PPV and not the network specials.  At least this turned out to be a good show but the UFC needs to step up their game on FOX if they want to create new fans.