Many American professional sports can be brutal and very violent at times.  When most sports fans think of horrible sports injuries that were broadcast on American television they think of one particular injury.  That injury is the infamous Lawrence Taylor tackle on quarterback Joe Theisman in November of 1985 on Monday Night Football.  Theisman had his lower leg completely snapped in half and it was live for all of America to see.  There is an even worse sports injury that happened almost four years later.

On March 22,1989 the NHL match up between the St Louis Blues and the Buffalo Sabers began in Buffalo, NY.  Goal tending that night for the Sabers was the 8th year veteran Clint Malarchuk.  Nobody in the building had any idea what was about to happen, including Malarchuk.  During a fight for the puck at the net between Blues player Steve Tuttle and Sabers player Uwe Krupp both of them crashed into the goal.  When they did Tuttle’s skate caught Malarchuk in the throat.  Malarchuk immediately clutched his throat area.  Once every one of the Ice realized what was happening blood began pouring to the Ice from Malarchuk’s neck.  He was aided to by the referee and a few players.  The television broadcast went to a commercial break.  When they came back Malarchuk was being taken off of the ice.  Their were several pools of blood after he was taken into the back of the Arena. 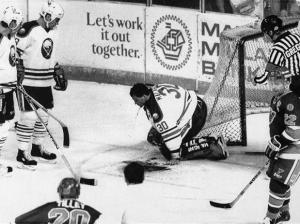 One man was responsible for saving Clint Malarchuk’s life that night, team trainer Jim Pizzutelli.  Pizzutelli reached into Malarchuk’s neck and pinched off the bleeding until doctors could arrive.  It has been estimated that if the cut was just a little high on his neck he would have been dead by the time he received medical attention.  Malarchuk lost 1/3 of his entire blood supply and needed over 300 stitches to close the cut.

Clint Malarchuk would end up playing a few more season following his recovery.  During his seasons following this incident his play was never quite as good as it had been previous to the injury.  He would retire from Hockey 1996 and later found himself as a coach for a few NHL teams.