It’s Time For The Magic To Trade Dwight Howard

The NBA Draft is coming up this week and that means many story lines for many teams will take a twist through trades and picks.  The biggest possible trade story leading up to the Draft is will the Magic trade Dwight Howard away for some great picks or even top level players.  I have no faith that the Magic will take advantage of teams wanting Howard and wanting him now.   Teams like the Houston Rockets are trading players and moving up in the 1st round with 3 picks in the top 20 as of Tuesday.  Howard’s contract is up in 2013 and the Rockets want him prior to his contract expiring.  The Magic might have a good opportunity to do something about their “Dwight Drama”. 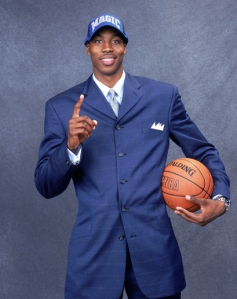 Dwight Howard on draft day 2004 after being selected with the 1st overall pick by the Magic.
(Getty Images)

The Story of Dwight Howard and the Magic has been a complicated one.  The Magic drafted Howard out of high school in 2004 with the 1st overall pick.  Howard over the years has developed into one of the best big men in the game and has had some success with the team.  Howard led the Magic to the 2009 NBA Finals where they were defeated by the Los Angeles Lakers in 5 games.  The Magic have been contenders in the Eastern Conference for the last few years in large part to Howard.  Dwight Howard has however also brought a lot of controversy to Orlando with his talent.  He had a very public feud with the Magic’s former Head Coach Stan Van Gundy.  It got really ugly during last season and Van Gundy was fired earlier this summer.  Howard also brought drama near the trade deadline when he was not signing his clause to come back for his final year of his contract.  He ended up signing hours before the deadline and the Magic did not trade him.  It was a smart move for the Magic to put the pressure on Howard and to not trade him at the time when a trade for him would not yield enough in return for the Magic.

I say the time to pull the trigger is on draft night.  The Magic could possibly be offered some really good deals and should strongly consider every one they receive.  The Magic need not look to far into their past to be reminded why they should get rid of Howard before his contract expires.

In 1996 Shaq left the Magic for the Lakers in a similar situation where the team was not willing to give him exactly what he wanted and headed elsewhere.  Shaq left and the Magic had nothing to show for it, they would have gotten a mega trade if they would have just looked around instead of fooling themselves that they could resign him.

Dwight Howard has made it no secret that he would like to play for the soon to be Nets of Brooklyn or for the Dallas Mavericks.  The relationship between the Magic and Howard is just too volatile for it to continue.  The Magic for a long time have been fooling themselves again that like Shaq that they can resign the star.  I think there is no way he would sign with the Magic again even if the money was right.  Howard is an awesome talent but he is just not going to stay with the team any longer than he needs to. The Magic cannot afford to have Howard leave and get nothing in return.  He is too good of a talent and a player of his caliber could yield players that could build this team for the future. The Magic owe it to the city of Orlando and their fans to send Howard packing.  So as the saying goes “THE TIME IS NOW!”

Lebron Is Not Free From Scrutiny Yet

Lebron James with the one prize that eluded him for over 9 years.
(Photo By: David Dow/Getty Images)

So the craziest thing happened on Thursday night, well maybe it was not so crazy after all.  Lebron James and the Miami Heat won the NBA Championship over the Thunder.  James who is one of the best players in basketball captured his first NBA Title.  It should be no surprise that he won a ring but for many it is.  James has had many ups and downs during his 9 year career and had 2  failed Finals opportunities.  It was what he had done in those 9 years that made a lot of fans skeptical.  He should a lot of immaturity and also made a lot of bad decisions when the pressure was turned up.  He was able to overcome all of that but he still has not won the hearts of many.

Lebron showed how much he had grown up during this playoff run.  He not only had his best playoff games and stats ever but he also handled the loses and the dealings with the media better.  Now of course James is not the only player on the Heat but he is their focal point and as he goes so does the team.  The Heat are a talented group with two other superstars in Chris Bosh and Dwayne Wade plus a good cast of supporting players.  They can win without James but need him to win it all.  He came through big during this post season and we should be seeing more of this in the years to come.

The “James Haters” are still out there and they are showing everyone that they are not going anywhere.  In many ways James created a lot of this himself.  He turned a lot of people off during his time in Cleveland with his behavior during their failed post season runs.  His biggest offense would have to be the way he left Cleveland and let the world know where he was going.   In a live prime time special James from a Boys and Girls Club in Ohio told the world he would be going to…Maimi, really?  James may never let that one down.

Most of James’ faults in the past could have been put away with the Heat capturing the NBA Championship on Thursday.  Except there is one more thing lingering around.  When he went to Miami in 2010 the Heat had this ridiculous pep rally event to show off James and he said something that will haunt him probably until he retires.  The great Lebron told the fans of Miami that they were not only winning 1 championship but 6.  Yeah he really said that.  Whether that will happen is unlikely but even if it was he made a bad move by saying that.  Because he said that it takes away from every championship he will win until he reaches that number.  The anti-Lebron fans and media will not forget that anytime soon if ever.

Lebron has accomplished great things in the league and has finally got the championship monkey off of his back.  He still has a ways to go to clear his image.  If he continues to mature and wins another championship or two it is possible the haters will disappear.  If he doesn’t then Lebron will be remembered not only for his incredible talent but also being known as the most polarizing player in the history of the NBA and maybe even professional sports.