Many American professional sports can be brutal and very violent at times.  When most sports fans think of horrible sports injuries that were broadcast on American television they think of one particular injury.  That injury is the infamous Lawrence Taylor tackle on quarterback Joe Theisman in November of 1985 on Monday Night Football.  Theisman had his lower leg completely snapped in half and it was live for all of America to see.  There is an even worse sports injury that happened almost four years later.

On March 22,1989 the NHL match up between the St Louis Blues and the Buffalo Sabers began in Buffalo, NY.  Goal tending that night for the Sabers was the 8th year veteran Clint Malarchuk.  Nobody in the building had any idea what was about to happen, including Malarchuk.  During a fight for the puck at the net between Blues player Steve Tuttle and Sabers player Uwe Krupp both of them crashed into the goal.  When they did Tuttle’s skate caught Malarchuk in the throat.  Malarchuk immediately clutched his throat area.  Once every one of the Ice realized what was happening blood began pouring to the Ice from Malarchuk’s neck.  He was aided to by the referee and a few players.  The television broadcast went to a commercial break.  When they came back Malarchuk was being taken off of the ice.  Their were several pools of blood after he was taken into the back of the Arena.

One man was responsible for saving Clint Malarchuk’s life that night, team trainer Jim Pizzutelli.  Pizzutelli reached into Malarchuk’s neck and pinched off the bleeding until doctors could arrive.  It has been estimated that if the cut was just a little high on his neck he would have been dead by the time he received medical attention.  Malarchuk lost 1/3 of his entire blood supply and needed over 300 stitches to close the cut.

Clint Malarchuk would end up playing a few more season following his recovery.  During his seasons following this incident his play was never quite as good as it had been previous to the injury.  He would retire from Hockey 1996 and later found himself as a coach for a few NHL teams.

The L.A. Kings are on their way to the Stanley Cup Finals.  Its their first time since 1993 when NHL Legend Wayne Gretzky played for the Kings.  The Kings have never won the Stanley Cup and are more than ready to capture it this year.

The Kings had an average regular season finishing with a record of 40 wins, 27 loses and 15overtime loses.  When April started and the final games before the post season were about to be played many thought the Kings would not even qualify for the playoffs.  Well they did but barely and got the placed in the playoffs as the 8th seed.  The Kings faced off against the 1st seeded Vancouver Canucks and shocked the hockey world by taking the series in 5 games.  It was their first time making it out of the first round since 2001.  The Kings then swept the 2nd seeded St. Louis Blues and the hockey world started to think, maybe these guys are for real.  Last night it was confirmed when the Kings took game 5 against the Phoenix Coyotes by a score of 4-3 in overtime to advance into the Finals.  The Kings made history during this incredible playoff run by being the first 8th seeded team to beat both the 1st and 2nd seeded teams in the playoffs.

The Kings star through this playoff season has been their American born Right Wing Dustin Brown.  Brown scored 7 goal, 9 assists and had 3 game winning goals in the playoffs.  He has been their leader and the rest of the team has followed with incredible play.  If he keeps it up he will definitely take the MVP trophy in the Stanley Cup.

The Kings must wait now to find out their opponent.  The New York Rangers and New Jersey Devils are still battling it out in the Eastern Conference Finals.  The Ranger and the Devils are set to play Game 7 tonight in New York.  I have a feeling that the Rangers will take the game and advance to their first Finals since 1994.  We will find out really soon. 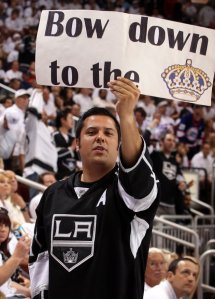 L.A. Kings fan holding a sign that says it all.
(Getty Images)

The Kings have really sparked interest in Los Angeles for Hockey.  The city has had their loyal fans but the casual fans left when Gretzky went to play for the Rangers in the late 1990s.  The L.A. Sports Scene is really different this summer with the Lakers and the Clippers already out of the NBA Playoffs.  The city of Los Angeles needs the Kings right now.  This is the perfect opportunity for the Kings to brighten up the city with Hockey excitement.

I feel this is a Kings team that is destined to win the Cup this year.  I did not think so going into the playoffs but I have seen the playoff greatness.  This would be one of the most surprising NHL Playoff runs we have ever seen if they can capture the cup.  We could be calling it the “King’s Cup”  in just a matter of a couple of weeks.