Jose Reyes’ Hitting Streak Comes To An End At 26 Games

The longest hitting streak of this season has come to an end today in New York.  Jose Reyes went 0-4 against the New York Mets pitcher R.A. Dickey.  Reyes is now 2-16 all time against Dickey.  The consecutive game hitting streak was ended at 26 games.  Reyes will likely keep the record through the end of the 2012 season.  Reyes started this streak after the All Star break on July 13th and did not let up until Thursday the 9th of August.  The pitching of R.A. Dickey proved to be too much for Reyes.  If anyone was going to end the streak abruptly it would be the crafty knuckleballer. 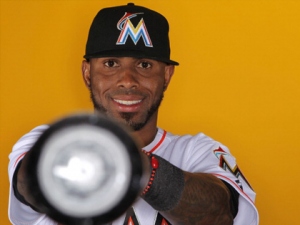 Reyes streak was the last remaining hope that Marlins fans had for any excitement this year.  The team has fallen 17 games back behind the National League East leading Washington Nationals.  The hitting streak was just starting to get major media attention and just as it was it is already over.  It was a fun ride to watch the suspense of Reyes getting hits in many of the games in late innings was energizing.  Reyes is the defending N.L. batting champion.  He is not going to win that title this year but showed that he is still a great hitter and a valuable asset to his team this year.

Where do the Marlins go from here?  Likely straight to the off season with no more major stories for the team this season.  Although there is another potential streak brewing.  The Marlins Carlos Lee has a 14 game hitting streak.  Lee will probably not reach even 20 games given his aging veteran status, but hey you never really know.

Reyes has been a great addition to this Marlins team this year.  Lucky for the fans of South Florida he will be back next season.  With any luck his success will rub off on the rest of the team and the Marlins will be the contenders they were supposed to be this year.

Jose Reyes extended his hitting streak to 24 games today.  The hit came in the top of the 4th inning against Stephen Strasburg and the Washington Nationals.  Reyes now has the record this season for most consecutive games with a hit.  He has been on fire since July 13th and shows no sign of slowing down.  The Marlins have been having a terrible season and Reyes is the only thing that the fans can be proud of.  We could be witnessing history in the Making.

The Marlins will have a day off on Monday before taking on the Met in New York City.  This is exciting for the fact that Reyes used to play for the Mets and has a chance to continue his streak in a familiar place.  The sports world will more than likely be paying a lot more attention to this streak now that it is the record for this season.  I can’t wait to see how long this ride can go.

The Miami Marlins are having a disappointing season, so much so that no one saw this coming. The team headed into the 2012 season with so much hope and excitement for what could be. They have dismantled the team to the point it hardly resembles the team that was supposed to make the playoffs when the year began. As of Saturday the team sits 14.5 games behind the 1st place Washington Nationals and a Wildcard birth looks very unlikely. The only bright spot that can be seen at the point is Jose Reyes and his hot hitting streak. 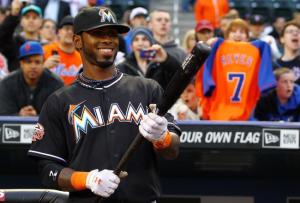 Jose Reyes began this hitting streak on July 13th and is holding strong at 22 games going into Saturday’s game against the Nationals. Reyes went 1-3 in the first game of Friday’s double header with the Nationals and 3-5 in the second game. Reyes has always been a great hitter but has really improved his hitting and it shows with this current streak. He broke his previous streak of 19 games this past week.

Luis Castillo holds the team record for most consecutive games with a hit with 35 games in 2002. That is a mark that Reyes has a strong chance of beating. The have been 55 players in the history of Major League Baseball to have at least 30 consecutive games with a hit. Reyes is the caliber of hitter and streaky enough to become number 56. The question the will be asked if he can make it past 30 will be how far can he go?

Everyone knows that Joe DiMaggio holds the record at 56 games in 1941 and that mark is very unlikely to be broken soon if ever. The closest anyone has come in the last 20 years was the Phillies Jimmy Rollins in the 2005 and 2006 seasons with 38 games. If anyone was going to make a good run and come close to DiMaggio in this era of baseball it would be Joe Reyes. Reyes is still very young and has a lot of potential as a hitter even though he is already one of the best in baseball. Reyes is the defending National League batting champion and this will not be his last claim to that title.

As this season grows older and the Marlins fall deeper in the standings the Marlins might have something to get excited about. That rests solely in the hands of Jose Reyes and his bat. Could we be watching history right now? It is too early to tell but we are seeing an amazing streak and its time for the sports world to pay attention to Reyes. If they don’t start now they may be missing history in the making.

The MLB Draft, Do You Care? 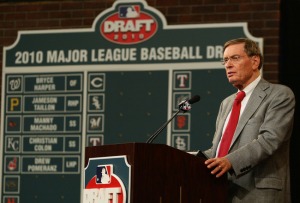 The 2012 Major League Baseball Draft starts today.  Many baseball fans with the exception of the die hard fans don’t care about it or even know it happening today.  This will be the fourth year the 1st round has been televised.  Much like the NFL’s Draft, MLB will hold the event in New York City.  It will also start in prime time at 7pm EST.  There is however a big difference between the MLB Draft and the NBA and NFL Drafts.

The NBA and NFL have both had televised drafts for many year.  Both leagues have been really successful with their drafts.  Building fan excitement every year when the NFL draft approaches.  The NBA also has a lot of fan attention leading to their June draft every year.  Baseball wants very much to bring the same excitement to their draft.

The MLB draft will not reach the level of the other sports drafts anytime soon.  There are many things baseball has going against it.  One of the blaring problems is lack of star power and players the fans can connect with.  Many of the top players come out of the high school level.  Unlike football,  high school baseball is not followed as closely by many fans and usually only the die hard fans keep up with that level.  The other players come from college baseball which like the previous topic is not followed by fans has much as football or basketball’s college level.  Nor does college baseball get the same media attention during their season. There have been a few players that carried a lot of attention going into baseballs June Draft.  Two of the most recent “big hype” national media type stars where the Washington Nationals Stephen Strasburg in 2009 and Bryce Harper in 2010. We won’t be seeing any baseball players going into the draft with the same media attention anytime soon.

When the stars are selected most don’t see the big leagues for at least a year.  Some players need 2 to 5 years to develop to be major league ready.  The NBA and NFL have the ability to excite fans with their drafts because the players will be on the field with the big clubs within months.  Many player go on to a lot of success even in their first year in the other leagues.  Baseball cannot do anything about this particular problem.  Its a system that has worked for many years, it just does not cater to the draft.

For decades baseball held their draft non televised.  In 2009 they started to air the 1st round on their MLB Network.  Many fans won’t watch because they just can’t.  The MLB Network is carried in far less homes than the networks that air the NBA and NFL Drafts.  If fans did tune in they would see a room with very charismatic (I am being sarcastic) MLB Commissioner Bud Selig and a bunch of team representatives and only a couple of players if any in attendance.  You would be better off just checking the internet to find out and not waste your time watching the broadcast.

MLB has a lot they need to work on to make the Draft watchable and to increase excitement for it.  The first thing they need to work on is getting more players involved in the event.  Having player in attendance would help the broadcast, with the players showing emotion and excitement when selected by the clubs.  The MLB needs to also work on getting the names and faces of the upcoming draft prospects out there.  They could broadcast high school games featuring top prospects.  Finally baseball needs to get a deal with a better network to air the event.  That probably won’t happen until they improve the first two problems I previously stated.

Baseball is a great game and the draft deserves just as much fan fare as the other leagues.  Until baseball can make the fans care we are going to have an event like we will see tonight, an unwatched and mostly unknown happening.